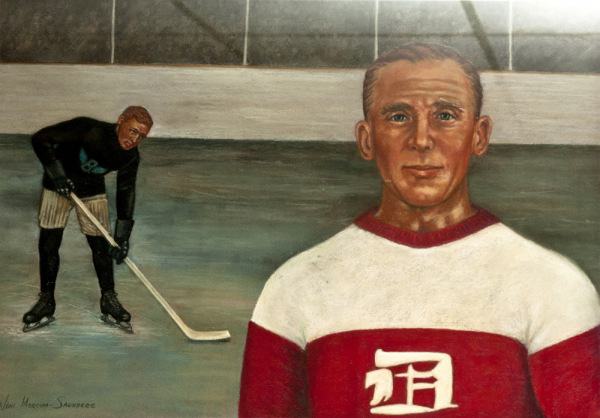 Frank Foyston is acknowledged by hockey historians to be among the greatest hockey players of the first quarter-century. Born in Minesing, he and his six brothers began playing hockey on the frozen ponds of the family farm, and at the old Princess Rink of that town. He began to play organized hockey at the age of 15 with the Minesing Greenshirts, and was recommended by Oliver Cameron to Johnny Dyment, the manager of the Barrie Colts juniors of the Ontario Hockey Association. He joined the Colts as a left wing for the 1909-1910 season, and was immediately a star. Harry Foyston recalls his brother travelling to Barrie by horse-drawn cutter, a trip that would often take over an hour in the bitter winter snowstorms. Frank played three seasons with the Colts (also suiting up for the Greenshirts) before joining Toronto Eaton’s of the Senior O.H.A. for six games at the end of the 1911-12 season, in which he scored 15 times.

Foyston turned professional and joined the Toronto Blueshirts of the National Hockey Association (forerunner of the N.H.L.) for the 1912-13 campaign. In three full seasons he was a scoring sensation, helping the Blueshirts to the 1913-14 Stanley Cup championship. In 1915, however, he was one of several players lured to the west coast when the wealthy Seattle Metropolitans were formed for the 1915-16 Pacific Coast League season. Foyston played nine full seasons with the Mets, becoming one of the continent’s most famous professional players. He was selected six times to the league’s First All-Star Team, and twice to the Second. He was the league’s Most Valuable Player in 1917, leading the club to a Stanley Cup victory over the Montreal Canadiens, the first-ever such victory by an American-based club. When Seattle folded after the 1923-24 season, Foyston joined the Victoria Cougars, where he won his third Stanley Cup title in 1924-25, becoming the only player ever to win Stanley Cup titles as a player with three different teams.

Professional hockey collapsed in the west after his second season in Victoria (1925-26), and the Cougars were sold to eastern interests, becoming the Detroit Cougars of the National Hockey League in 1926-27. He played two N.H.L. seasons before being appointed playing-manager with the Detroit Olympics of the Can-Am League, where he spent three seasons. Frank Foyston retired from playing in 1930. He coached Syracuse Stars in 1930-31, the Bronx Tigers of the Can-Am league through 1931-32 and the Seattle Seahawks of the North West Hockey League in 1934 and 1935.

He scored 240 goals during a major league career that spanned 361 games, a phenomenal record for that era. He was elected to the Hockey Hall of Fame in 1958.
Foyston was also a standout soccer forward and baseball shortstop for the Simcoe County league teams of his beloved Minesing, where he returned every summer.