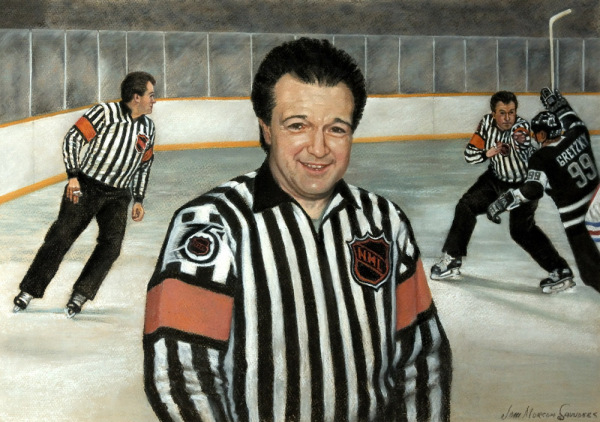 Ron Hoggarth grew up in the village of Ivy and began to play hockey and baseball while attending Ivy Public School. He later attended Central Collegiate in Barrie and played both football and basketball and was Central’s Head Boy.

Hoggarth became a ball player of some local prominence. At the age of 15 he pitched Ivy to the South Simcoe Championship and. was scouted by the Philadelphia Phillies. He played with Ivy’s Simcoe County Championship clubs 1960-65 and played in the All Ontario softball Championship twice. In 1968, he played Senior fastball in the Barrie and District Men’s League, finishing second in batting and being named to the all-star Team. Hoggarth’s fastball career began in 1966 with Church Homes (All-Ontario finalists), with whom he played until 1972.

Ron Hoggarth began playing minor hockey in Ivy. Moving on to the Barrie Midgets, he played on an OMHA. Championship team, before earning a tryout with the Kitchener Rangers. He was sent to the Burlington Jr.”B” team, but there he broke his arm and was forced to return home. He played three seasons with the Barrie Junior “C” team, before going to McMaster University. He played 2 seasons with the Varsity team before graduation.

Hoggarth began officiating minor hockey while still in high school, and this eventually became his profession, and his lasting mark in the hockey world. He started refereeing in the OHL in 1969 and officiated in the Memorial Cup in 1969, 1970 and 1971. In those same three years, he was also a referee in the Allan Cup.

In 1971 he signed an N.H.L. contract, and over a distinguished 25- year career became one of the league’s most experienced officials. Hoggarth worked 550 games in the American and Central Leagues, before officiating in 1175 regular season NHL matches and 150 playoff games, second only in games worked to Hockey Hall of Famer Andy VanHellemond. He refereed the 1989 N.H.L. All-Star Game and 35 international games before he retired in 1994.

In the mid seventies, Hoggarth along with Terry Martin began and operated the Barrie Summer Hockey School, a program which over the next 10 years helped to develop many Barrie Hockey players including Shayne Corson and Greg Johnston. When Hoggarth retired as an official he then acted as the vice president of the new Colonial Professional League (now the United Hockey League) and he held that position for two years, 1995 and 1996.

Ron Hoggarth continues to be involved in hockey with the Legends of Hockey working in over 50 games a year across Canada for various charities. He is in demand as a public speaker and promotes hockey and Barrie at every opportunity.