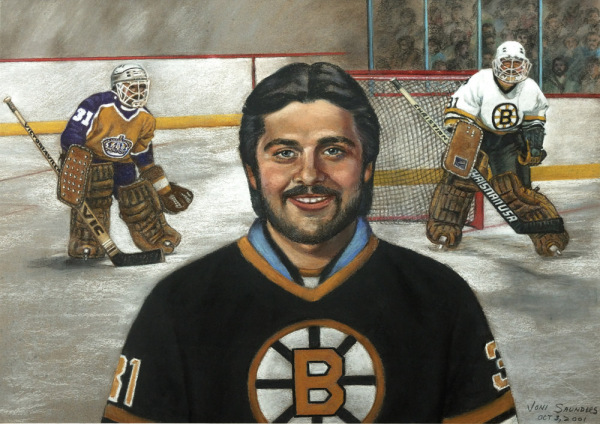 Doug Keans was born in Pembroke, Ontario, but moved to Barrie as a youngster, where he developed as a goaltender in the Barrie Minor Hockey Association. He was part of the great Barrie Co-op Midget club which won the 1974-75 Wrigley National Midget Championship, and played an exhibition series in the Soviet Union. He was drafted in the 1975 OHA Junior “A” draft by the Oshawa Generals, but got into only one game before returning to play 1975-76 with the hometown Barrie Junior “B” Colts. Keans subsequently played 90 games over two seasons with the Generals from 1976 to78. He was selected by the Los Angeles Kings in the 6th round (94th overall) of the 1978 National Hockey League Entry Draft, but split most of his first two pro seasons with the Saginaw Gears (International Hockey League) and Binghamton Dusters (American Hockey League) before getting into 10 games with the Kings in 1979-80. He spent the next three seasons 1980-83 alternating between the Kings and minor league stops with the Houston Apollos, Oklahoma City Stars (Central Hockey League) and New Haven Nighthawks (AHL), before being claimed on waivers by the Boston Bruins May 24, 1983.

Keans enjoyed steady and productive employment with the Bruins for four seasons (1983-1987), where he became known as an aggressive goaltender who handled the puck well. His first full season with Boston was his best. He went 19-8-3 in 33 games, with a 3.10 goals-against average, and won the Bruins 1983-84 “Gallery Gods” Defensive Player of the Year Award.

He played in 30 games with Boston during the 1987-88 campaign, but cleared waivers and was sent to the team’s AHL affiliate Maine Mariners when the Bruins acquired Bill Ranford. He split the following season (1988-89) between the Baltimore Skipjacks and Springfield Indians of the AHL, and then ended his active career with the Minnesota Iron Rangers of the AHA (1992-93), and the Jacksonville Bullets of the Sun Coast League (1992-93, 1995-96).