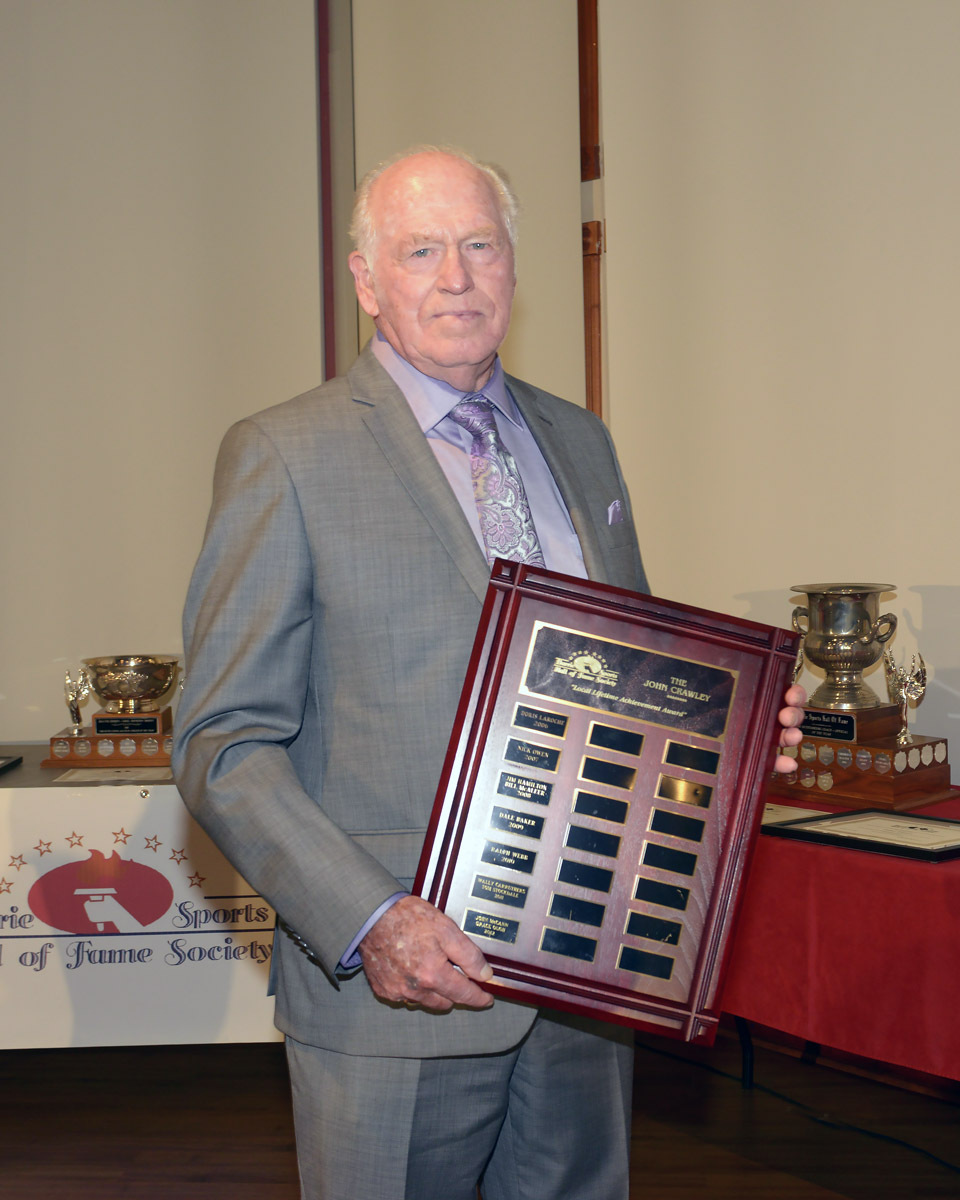 Don Roulston has contributed to the sporting scene of Barrie for over 35 years. He was a Team Manager in the Barrie Minor Hockey Association (B.M.H.A.) between 1978 and 1982. Highlights of his teams involvement included an Ontario Minor Hockey Association (O.M.H.A.) – Minor Bantam Championship in 1978-79 followed by a trip to the Ontario Championship – Loblaw Cup with the 1979-80 Bantam ‘AAA’ O.M.H.A. Champions. (This team was honoured by the Barrie Sports Hall of Fame in 10.) As team manager, he had a part in raising sufficient funds to allow the Major Bantam and Major Midget teams to travel to week long tournaments in Kamloops B.C. and Calgary, Alberta.

In May 1986, Don received the Barrie Minor Hockey Association Award for support and promotion of Minor Hockey in the City of Barrie. His participation in Barrie hockey blossomed when he assumed the position of Manager of the Barrie Colts Junior ‘B’ Hockey Club between 1982 and 1986 and again between 1987 and 1990. During these periods, he played a pivotal role with Colt teams that won four Central Ontario Junior Hockey League (C.O.J.H.L.) Championships. They were also finalists on two other occasions. He was appointed General Manager of the Barrie Colts during the 1990-91 season. The Colts off-ice success was evident, but Roulston’s contribution as the Colts’ representative on the C.O.J.H.L. Board was also significant. He worked hard for the betterment of the league and was considered a voice of reason at the league level Roulston was highly respected by members of the junior hockey governing body, the Ontario Hockey Association. The O.H.A. appointed Roulston as convenor of the East Division of the Ontario Provincial Junior “A” Hockey League.

In 1991, private ownership purchased the Barrie Colts Junior Hockey Club, but Roulston continued his association with the Colts. He became an advisor to a newly-appointed General Manager and Coach and played a key role in the transition. In addition he and his wife, June, teamed up to operate a Hospitality Room for the Barrie Colts Junior ‘B’ team in 1984. They continued this service for the Colts Junior ‘A’ Tier II franchises between 1992 and 1995. In the 1992-93 season, he and June worked overtime in a prolonged season when the regular season undefeated Colts marched on to capture the Ontario Championship -‘Sutherland Cup’, an accomplishment not experienced by the City of Barrie since 1950. The Hospitality Room was the talk of the C.O.J.H.L. It became a place for hockey executives, scouts and the media to gather to renew ties, and exchange stories and notes. The Barrie Colts made the jump to the Ontario Hockey league (O.H.L.) in 1995 and Don and June joined the team. They continued to operate the Hospitality Room for the O.H.L. Barrie Colts until 1998.

In 2004, Roulston became a member of the Barrie Sports Hall of Fame Board of Directors. He has been an active member of the Board for the past ten years. He was chair of the Trophies and & Display committee for four years. He has also been an active and contributing member on several other committees including Selection, induction Ceremony, Website development, Sponsorship and fund raising. Roulston was Co-Chair of the Board of Directors from 2009 to 2011. During this period a number of significant accomplishments were reached. The Hall developed a modern up-to-date Web site. The Society was incorporated as a not for profit Corporation. An agreement was reached with the City to insure the Sports Hall’s portraits/memorabilia from damage. A marketing committee was formed to examine how to make the Hall of Fame more self reliant.

Don Roulston is still an active member of the Barrie Sports Hall of Fame Society.