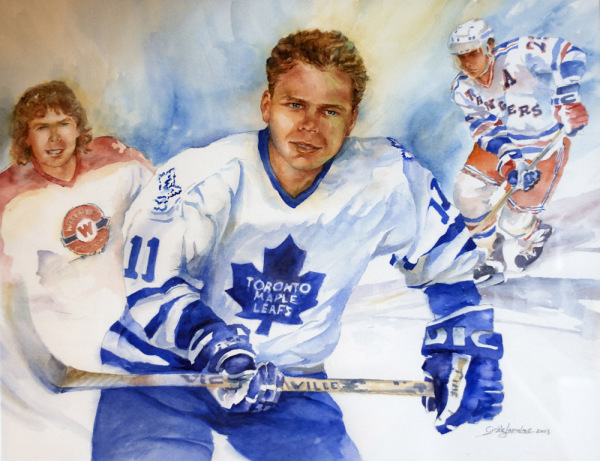 Mike Gartner was born in Ottawa, but moved at young age with his family to Mississauga, where he learned to skate at the Dixie Arena, and progressed in minor hockey through the Mississauga Reps organization. The Gartner’s later moved to a farm outside Barrie, and Mike played as a Bantam and Minor Midget in Barrie Minor Hockey. He was called up from the Minor Midgets to the Co-op Midgets during their 1975 playoff run, contributing to Barrie’s Canadian National Wrigley Midget Championship, and receiving his first international experience during the Co-ops exhibition tour of Moscow.

Gartner began 1975-76 with the Barrie Midgets, but soon left to play Tier II Junior “A” hockey with the Toronto Young Nationals. Following that season, he was selected in the OHL draft by the Niagara Falls Flyers, with whom he spent two brilliant seasons. He amassed 74 goats and 165 points, made the First All-Star team, and represented Canada at the 1978 World Junior Championships, scoring six points in helping the team earn a bronze medal.

Gartner was ready to turn professional, but still only 18 was too young for the NHL. He signed instead with the WHA Cincinnati Stingers, where, in 1978-79, he scored 52 points, and was runner-up to Wayne Gretzky as the WHA’s Rookie-of-the-Year. At season’s end, the WHA merged four of its teams with the NHL, and Gartner was selected 4th overall in the 1979 NHL Entry Draft by the Washington Capitals.

Mike Gartner’s NHL career combined both brilliance and consistency. In 19 seasons, in 1432 games with five teams (Washington, Minnesota, New York Rangers, Toronto and Phoenix), he scored 708 goals (only the 6th player in history to reach that plateau), and 1335 points. In 122 playoff games, he had 43 goals and 93 points. He holds two NHL records that speak to his consistency: 15 consecutive 30-goal seasons, and 17 total 30-goal seasons.

He appeared in seven NHL All-Star Games, including a 1996 Commissioner’s Selection, and was the 1993 MVP, when he scored four goals and added one assist. He won the NHL “Fastest Skater Competition” each of the three times he was entered, including in 1996 at age 36.

Gartner served on the National Hockey League Players Association Negotiating Committee, and as the NHLPA President. A devoted Christian, upon retirement, he worked with the NHLPA Goals and Dreams Foundation and willingly appears at many charitable fundraisers. He continues to give back to hockey as a coach in minor hockey. He is now a very successful businessman in the Toronto area and part owner of the National Training Rinks in Barrie, New Market and Richmond Hill.

Mike Gartner was elected to the Hockey Hall of Fame in 2001.