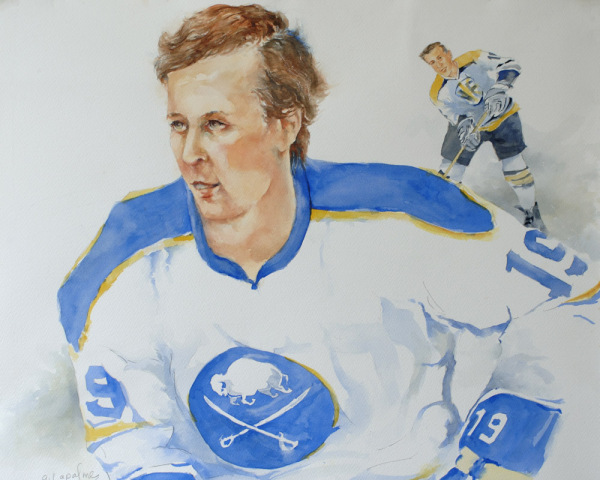 Steve Atkinson was born in Toronto, but moved to Barrie, with his family by the time he reached his first birthday. Growing up in Barrie he excelled in many sports from soccer at Codrington, to football at North, fastball for Lakeview Dairy, and golf at Richbrook and Shanty Bay where he once scored a hole in one on a par four hole. He began playing minor Hockey in Barrie and played on a “Little NHL” Bantam team that won an all Ontario Championship. It was the first minor hockey team from Barrie to compete at this level.

In 1965 Steve followed ‘Hap’ Emms to Niagara Falls to play for the newly located OHA Major Junior A Flyers in that city. Steve and the team went on to win the Memorial Cup that year. Three years later the team won a second Memorial Cup with Steve picking up the MVP award for his exceptional play.

In 1966 Steve was drafted 6th overall, in the first round, by the Detroit Red Wings of the NHL. His rights were immediately claimed by Boston Bruins as settlement of “future considerations” in a previous trade between the two teams. In 1968-69 Boston assigned him to, their affiliate,the Oklahoma City Blazers of the Central Professional Hockey League. In his first year he scored 40 goals and 40 assists to shatter a number of previous goal scoring records. At the end of the year he was named First Team CHL All-Star and CHL Rookie of the Year “.

Two years later his rights were acquired by St. Louis Blues in the 1970 Inter-League draft. Less than a month into the season St. Louis placed him on waivers and he was picked up by the Buffalo Sabres. In his first year he scored 20 Goals and 18 Assists. Steve played 2 more years in Buffalo but was left unprotected in the 1974 expansion draft. He was selected by Washington were he played for 2 more years before his NHL career came to an end.

His hockey career was far from over though. He spent a year with the Buffalo Noresman of the North American Hockey league scoring 30 goals and 31 Assists. He also skated for one year with the Toronto Toros of the newly formed World Hockey Association. In 1976-77 steve played with another winning team, the Brantford Alexanders of the Ontario Senior `A’ League. That year, Steve and his teammates captured the famous `Allan Cup’ a symbol of Canadian Hockey supremacy in the senior division.

After many years of following his hockey dreams, Steve settled back in Niagara Falls to devote time to a career and family. Steve Atkinson died of a heart attack on May 6, 2003 at the age of 54.