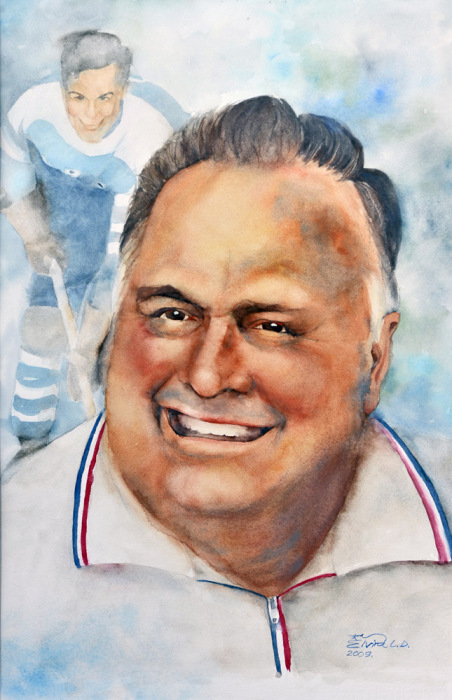 Ab Bowen was an active sports personality in Barrie and Simcoe County where he played hockey and fastball. Ab was a very accomplished hockey player playing for Barrie and Orillia in the intermediate hockey league. He was on the Boston Bruins negotiating list but chose to remain in Barrie.

After his playing days, Ab concentrated on coaching hockey, umpiring softball and officiating hockey in the area. His team accomplishments with the Co-op midget hockey teams were numerous and included winning the inaugural and second Richmond Hill International Midget Championship, the Brandon International Tournament and the 1972 All Ontario AA Midget Championship. The Tournament accomplishments were significant in that they had no divisions by population. Barrie at the time, with a population of 30000, was rated AA and in the tournaments they often competed against some of the best AAA teams in North America. Ab made sure his teams entered the most prestigious midget tournaments so that his AA players would get exposure to the Major Junior A scouts that were always in attendance.

Bowen’s contribution to the community included athletes who became business men in the community and several players who went on to play in the OHL and NHL. Some of these people include inducted Barrie Hall of Fame members Jack Lynch, Terry Martin and Dan Maloney. Other players of note were Glen Richardson, Brian Kinsella, Brian Curtis and Ron Bobette. Ab also ran a 3 week hockey school for returning college, OHL and NHL players. The school helped them improve their skills and conditioning so that when they entered their teams training camp they were always in top shape. Some of those players included Mike Gartner, Paul Coffey, Eric Lindros, Darcy Tucker, Shane Corson and Brett Lindros.

Ab‘s dedication to his community and others was significant and included helping young hockey players achieve their goals and become better people.