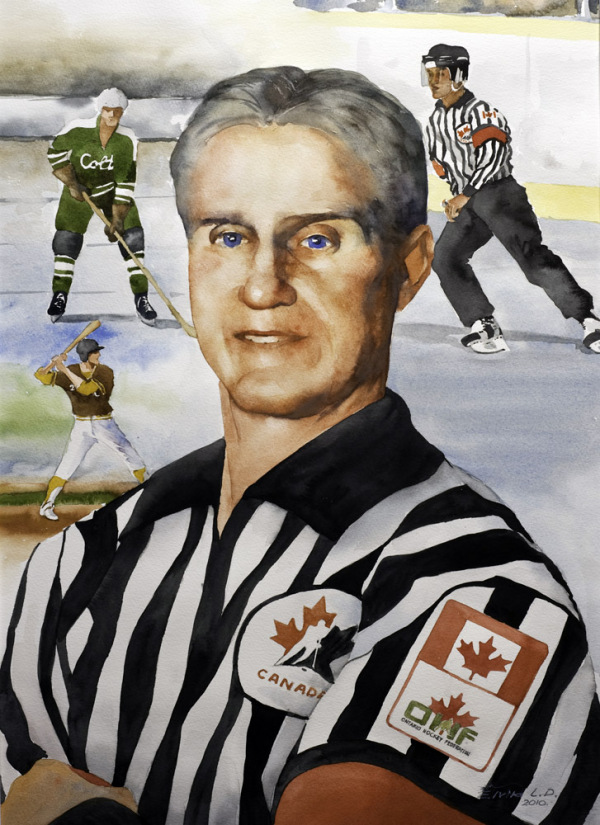 Ken Bannerman was born in Barrie where he attended Barrie North Collegiate. He was a member of their cross-country running and competitive gymnastics teams. He played representative hockey with the Barrie Minor Hockey Association (BMHA) winning an Ontario championship with his Pee Wee team. Ken played three years with the Barrie Colts Junior B team. He was named MVP of the Colts in 1971 and was the team’s leading scorer in 1972. For a short time in 1973, Ken played with the Welland Sabres Junior A team. He was also a member of the Georgian College varsity hockey team.

Bannerman also involved himself in baseball, fastball and gymnastics. He played softball during school years, intermediate and senior fastball in later years. His team won the league championship in 1985. In 1982, Bannerman was selected coach of the year with the Bayfield Furniture fastball team. He was instructor for the City of Barrie Gymnastic Program for Kids, and coached rep baseball at the T-ball, Pee Wee and Atom levels for Barrie Minor Baseball. He also coached Tyke and Atom hockey teams in the BMHA.

Bannerman was also into officiating, first as a linesman and then as a referee in minor hockey. He later was an OHA linesman and refereed at senior A and all junior levels in the OHA. He refereed junior league finals across Ontario for seven years. In 1989, he refereed the bronze medal game at the Canadian University National Championships. Bannerman achieved Level 6 classification of the International Ice Hockey Federation, the highest level possible in Canadian amateur hockey. In 1990, Bannerman represented Canada at the Japan Cup, which included Olympic teams from Russia, Sweden, Czech Republic and Japan. He refereed the gold medal game at this tournament. In 1992, Bannerman represented Canada at the World’s B Pool Championships and refereed the gold medal game. In 1994, he helped train and prepare Italian officials for the Winter Olympics. Overall, Bannerman has refereed 11 Exhibition Games with the Canadian Olympic team and has had 20 international assignments.

Bannerman is a Certified Master Course Instructor for the Canadian Amateur Hockey Association. He served four years as instructor for the OMHA and 15 years as instructor for the OHA and the Canadian Hockey Officiating Program. He was a referee supervisor in the OMHA for three years and spent 10 years supervising officials at the junior level of the OHA. In 1989, Bannerman received the Jack Clancy Award for an OHA official who demonstrates a dedicated and responsible attitude towards his duties and the association. In 2000, the OHA presented him with the John Blackwell award for the most deserving official during the current season. In 2005, the OHA added Bannerman’s name to the prestigious OHA Honor Roll in recognition of excellence and long-time service to the OHA and international hockey.