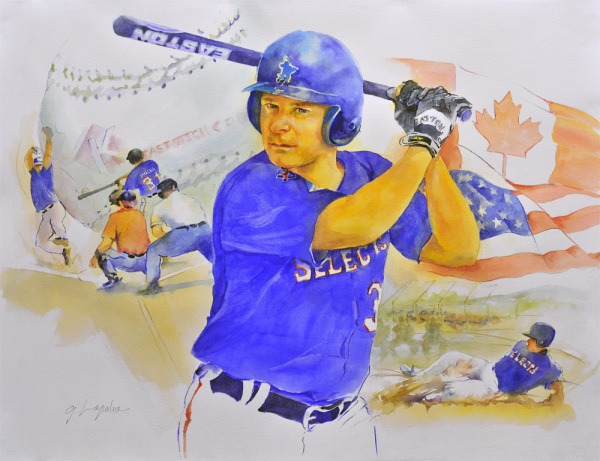 Greg Miller started playing fastball in Barrie at an early age. At the age of 16, some Toronto teams began to notice his hitting prowess and invited him to play at tournaments in Canada and the United States. In 1994 Greg’s good friend, Todd Martin, got him an invitation to play with the Napanee Express. Greg’s game took off. In 1996 he was invited to play with the famed Toronto Gators. Greg and the Gators ended the year by winning the Canadian Fastball Championships and finished third at the World Fastball championships.

In addition to playing Canadian fastball, Greg also played on a several American teams. These teams would compete in a number of tournaments and Greg would be on the road or in the air most weekends. Sometimes Greg would play over 70 games from May to September for these teams in addition to his Owen Sound games. From 2002 to 2004 Greg played with the Madison Wisconsin Farm Tavern team. In 2003 Greg and the Farm Tavern team competed in the World championships coming away with his second third place finish in World competition.

Greg took a year off to be with his wife Trila and their newborn daughter. In 2006 the the Kitchener Hallman Twins were hosting the 2006 ISC World Tournament. So Greg joined the Twins to once more try for that elusive World Championship. The Twins were eliminated from play by the eventual tournament champions. Greg played one more year with Kitchener before retiring to take up permanent residence in Elmvale.