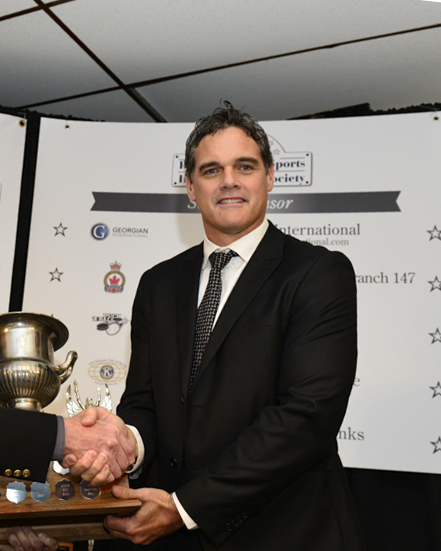 Joey Rampton, born in St. Paul’s Michigan, was a member of the Sault Ste. Marie Greyhounds of the OHL and went on to play for Western University where his team won the CIAU National Championship. He also attended the University of Toronto and played varsity hockey while attending medical school. In the 1984 entry draft, Joey was drafted by the Buffalo Sabres in the 5th round.

Joey has been active as a coach in Barrie Minor Lacrosse from 2008 to 2011, winning the 2010-2011 “B” Ontario Lacrosse Association Championship.

Rampton has been a BMHA coaching staff member since 2008. Joey Rampton, as head coach, led the Central Ontario “AA” Wolves to a “AAA” Hockey Tournament Championship in the 2007/2008 season. His teams were York Simcoe Hockey League Champions for 3 years.
In the BMHA, Joey has coached his hockey teams to 3 Ontario Minor Hockey Association Championships (2012-13, 2013-14, and 2014-15).His teams have earned 2 International Silverstick Championships, in 2013-14 and again in 2014-15. Since 2012, the BMHA teams that Rampton has coached have been ranked nationally. Currently the Bantam “AA” team is ranked #2 nationally. For the 2016-17 season, Rampton will be coaching the Minor Midget “AA” team for the BMHA.

Joey Rampton is a valued BMHA volunteer who dedicates countless hours towards the Association and the teams he coaches. As a veteran coach and volunteer, he often assists other coaches within the BMHA with practice plans, team challenges, and offers advice when requested. He is very well recognized and respected within the BMHA community.
When not coaching, Rampton is a member of the Vital Organs band who play in a number of local events and festivals such as Battle of the Bands (raising funds for the McLaren Art Centre) and the RVH Crystal Classic (Raising funds for the Royal Victoria Regional Health Centre). He is also a practicing physician at the Barrie Chronic pain Clinic and the RVH.