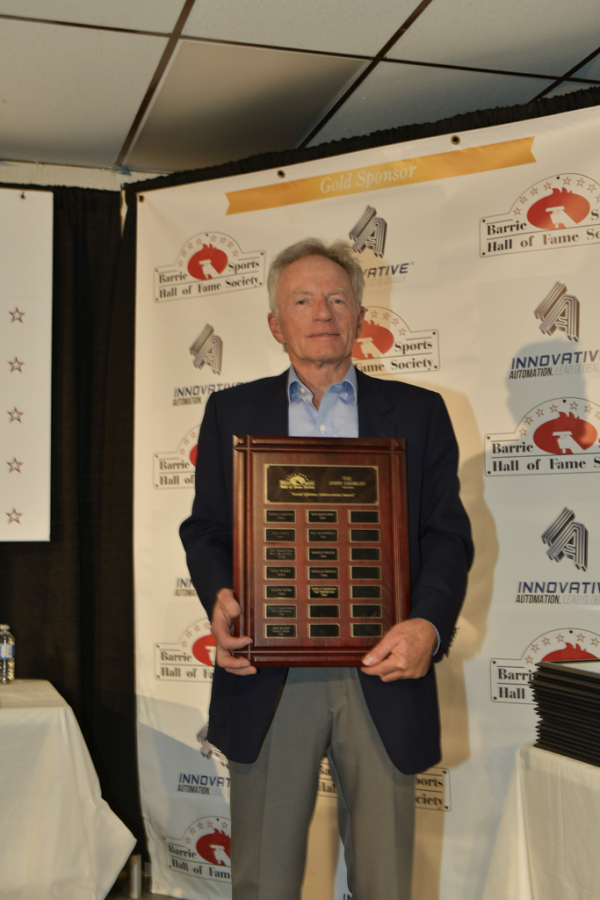 Jim Thompson was born and raised in Barrie. In his youth, he played Rep soccer and Rep hockey and in 1961-62 was a member of the OMHA Bantam Championship Hockey team. In 1963-64, Jim captained the OMHA Midget Championship Hockey team. In 1964-65, he was the fullback and linebacker on the Barrie North Collegiate GBSSA championship football team. 1966-67 saw Jim playing for the St. Thomas Barons hockey team that won the Western ‘Jr. B’ Championship. He was the League Rookie of the Year, as well as a 2nd team All-Star. Thompson played for the OHA Niagara Falls Flyers in 1967-68. This team went on to win the Memorial Cup that season.

During the mid 60’s until late 70’s, Jim played 3rd base for a number of Barrie Senior Fastball League Championship teams, demonstrating his all round athletic ability and prowess.

It was the sport of hockey, however, that was to punctuate Jim’s athletic career. He was a stalwart member of the OHA Senior ‘A’ Barrie Flyers during the 70’s that won 4 Ontario and Eastern Canadian Championships, culminating with the winning of the Allan Cup (emblematic of the Canadian Men Senior ‘A’ Hockey Championship), in 1972-73. In addition, Jim played on the 1976-77 Brantford Alexander’s Allan Cup Championship Team.

In 1974, Thompson represented Canada at the Swedish Star Cup, and in 1975, as an OHA All-Star, played against the Soviet Red Army team, many of whom had played against Team Canada in 1972 as well as NHL and WHA teams in famous showdowns.

Following his playing days, Jim Thompson successfully coached a number of BMHA teams, imparting his knowledge of the game to young men eager to learn the game. He successfully coached a Midget hockey team that toured Finland and Sweden in 1987-88. In addition, he coached the American Hotel fastball Team that won the storied Toronto Beaches Major Fastball League Championship in 1980. Once his Senior ‘A’ career was over, Jim played for the Barrie Douglas Oldtimers Hockey Club, considered as one of Ontario’s best teams during the 80’s, winning Championships throughout the Province of Ontario as well as in Florida, San Diego and Phoenix.

After his distinguished career in sports, Jim is now retired and lives in Barrie with his wife Kathy.