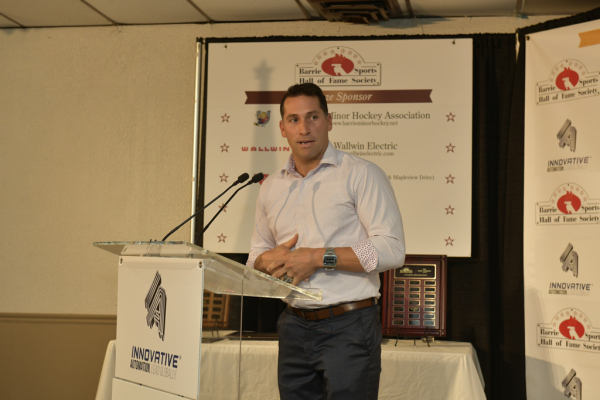 Ryan Spataro was born in Barrie in 1982. He is a valuable member of the Barrie Baycats Baseball Club that plays in the top level amateur baseball league in Ontario, the Intercounty Baseball League (IBL). This league serves as a valuable training ground for coaches, umpires and front office staff. More than 40 IBL players have advanced to Major League Baseball or returned to the IBL following their major league careers.

Ryan Spataro broke the stolen base record this past season and is now the IBL all-time stolen base leader with 193 in just 380 games. The previous record of 179 stolen bases was accomplished in 834 games, more than twice the number of games it took Spataro. Besides the stolen base record, Ryan has been honoured with many individual awards in his career with the Baycats. His .374 average (regular season), 592 hits, and 141 extra base hits (regular season) are all highest on the Baycats. He was the IBL Batting Champ in 2005 and 2010, as well as the IBL MVP for those same years. He has been an IBL 1st Team All Star 7 years; an IBL 2nd Team All Star 4 years; and has been on 5 IBL Championship teams.

Ryan is presently a fireman in the City of Barrie, married with 2 children. He participates in many charitable events representing the Barrie BayCats organization.