Jessica Brouillette – 2018 – Athlete of the Year 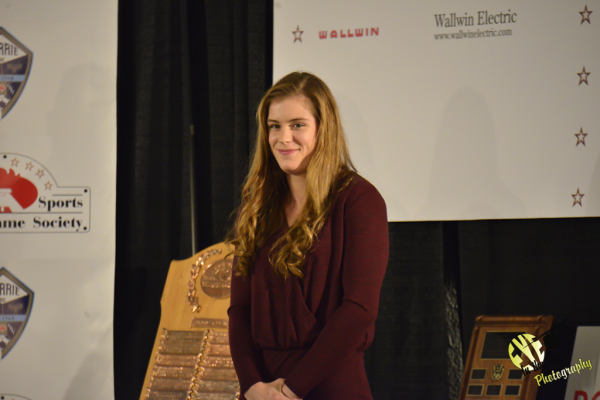 Jessica Brouillette is a wrestler from Barrie. Born in 1995, she began her amateur wrestling in Grade 7 at Prince of Wales School and at the K-Bay Wrestling Club. She continued to wrestle very successfully while attending high school at Barrie Central Collegiate Institute. She won several GBSSA individual titles as well as Gold at the provincial level (OFSAA). This success led to International opportunities representing Canada as a member of the Cadet, Junior and Senior National Teams.

In 2017, Jessica won Gold at the World Francophone Games (Women – 63 kg.) in Abidjan, Ivory Coast. She also dominated her weight class at the Canadian University level by placing first at both the OUA Tournament and the CIS Tournament and was named 2017 Outstanding Female Wrestler at the CIS Championship. In 2016 Jessica won Bronze at the 2016 World University Games in Corum, Turkey; won Bronze at NYAC / Bill Farrell International Open; won Silver at the Ontario Senior Championships; won Bronze at the International Canada Cup Tournament in Guelph; and placed 5th at the XXI Torneo International Tournament in Sassari, Italy. In Oct. of 2017, Jessica was selected for “Next-Generation” Funding Support (targeting athletes with evidence of podium success at the 2024 Olympic Games). In 2018, Jessica competed for Canada at the World Championships in Budapest. She achieved a 7th place standing in the 62 kg. weight class. She also became “Female Athlete of the Year” at Brock University in 2018. She was the first female wrestler to capture 5 consecutive team National Championships in a career. She was named a USPORTS First Team All-Canadian for the fourth time in her career and an OUA First Team All-Star. During the regular season, Brouillette placed 1st at the Brock Open, 1st at the Guelph open, and 3rd at the Commonwealth Games Trials. She also represented Team Canada at the 2018 Women’s World Cup in Japan. Moreover, Jessica took 1st place at the International Canada Cup Tournament in Guelph, and 1st place at the SFU International Tournament in B.C.

Jessica has completed her Undergraduate Degree in Sociology. She continues to train hard as a member of Canada’s National Team. Jessica also runs an after-school active-play program for young children at the YMCA in St. Catharines, as well as refereeing local tournaments and running “Wrestling Clinics” throughout Ontario.