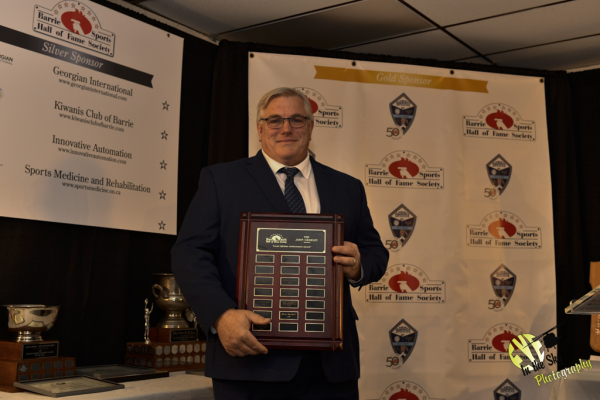 Brad Chestnut has been a mainstay in the coaching fraternity at Barrie Central Collegiate Institute since 1990. When Central closed, Brad moved to Bear Creek S.S. Under his guidance and tutelage, a great number of youngsters have advanced their athletic careers through the sports of rugby and wrestling provincially, nationally, and internationally.

As a rugby coach Chestnut directed the Central Jr. Boys to 5 Georgian Bay Secondary Schools Association (GBSSA) titles in 7 seasons. He then took over the reins of the Barrie Central Girls Rugby Team leading them to 4 GBSSA titles (including 3 Ontario Federation of School Athletic Association (OFSAA) medalist teams). A number of his athletes have gone on to gain university, national and international recognition. Recent graduates Megan Lukan and Emily Belchos have been members of Canada’s National Women’s Rugby Team. (Emily was a Barrie Sports Hall of Fame inductee in 2015 as a member of the silver medalist Canadian Women World Rugby team. Megan won Bronze at the 2016 Rio Olympics as a member of the Rugby Canada Olympic Womens Squad and will be an automatic Inductee to the BSHoF this year).

As a Wrestling coach Chestnut has been a guiding light for the sport in Simcoe County. In his early years at Barrie Central he developed the skills of notable athletes such as John Pridham, Nicole Pridham (the first female recipient of a scholarship from the Ontario Amateur Wrestling Association) and John Van Campen (World Cadet and Jr. Silver medalist).  In fact, a number of his former athletes have not only gone on to excel in the sport at the university level but are now giving back to the sport by coaching.

Over his tenure at Barrie Central, Chestnut helped organize and coordinate numerous Simcoe County Elementary School Wrestling tournaments, GBSSA Wrestling tournaments, rugby playoffs and the recent 2015 OFSSA Rugby tournament held here in Barrie. During the off seasons the “Chestnut Family barn” would often be used as a practice facility for both Wrestling and Rugby.