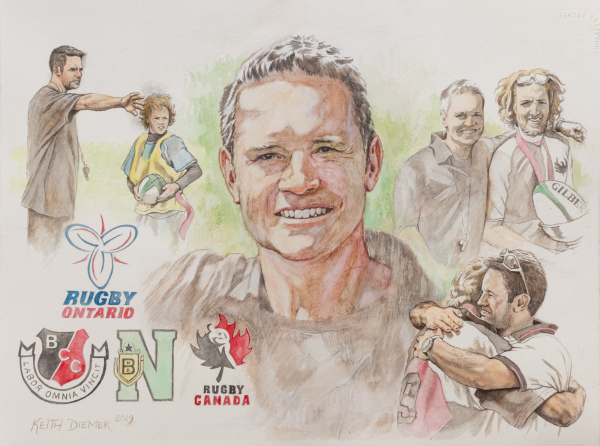 Ron Andrews was born in Brampton in 1965 and was an outstanding multi-sport athlete in high school. Ron was introduced to rugby while at Brampton Centennial SS and was described as a “natural” in the sport. He earned selection to the Ontario U19, U21 and U23 rugby teams as a scrumhalf. He continued his studies at McMaster University where he played varsity rugby from 1984 to 1988 and at Queen’s University in 1989. A chronic injury forced him to retire from playing rugby in 1990 at which point in time he pursued coaching.

His coaching career started at his alma mater, winning 3 ROPSAA championships. Ron relocated to Barrie to teach Physical Education at Barrie Central Collegiate in 1992. During his tenure at Central, Ron coached a variety of sports, winning GBSSA tiles in all – 1 football, 4 cross-country and 4 swimming. Ron’s biggest impact was in rugby – as the Head Coach of the Senior Boys program, Ron’s impact on high school rugby was unmatched. Ron’s teams from 1994 to 2005 and 2007 to 2016 were undefeated in GBSSA, winning an unprecedented 22 GBSSA titles and 19 OFSAA Medals – 9 Gold, 5 Silver and 5 Bronze.  The program produced over 60 provincial players and 23 national players. With the closing of Barrie Central Collegiate in 2016, Ron relocated to Barrie North and in his final year of coaching in 2019, North won the GBSSA rugby title. The final tally from coaching at Central and North was 403 wins, 36 losses, 6 ties – amassing 14,413 points for versus 2,005 points against.

During his time at Central, Ron also coached at the Provincial and National level. He was selected to coach Team Ontario from 1992 to 1997. Ron helped Ontario win 5 national championship silver medals and 1 bronze. This caught the attention of the National Program and Ron was offered the opportunity to coach the Canada U17 team in 1996 and 1997. Ron was then promoted to the Under 19 program in 1998. From 1998 to 2007, Ron coached the Canadian U19 team at 6 Junior World Rugby Championships in various locations around the world, the best result being a 4th place finish in 1999. After coaching 35 international matches, Ron’s family commitment necessitated his stepping away but not before he set the benchmark, at the time, for the most international games coached by a Canadian born coach.