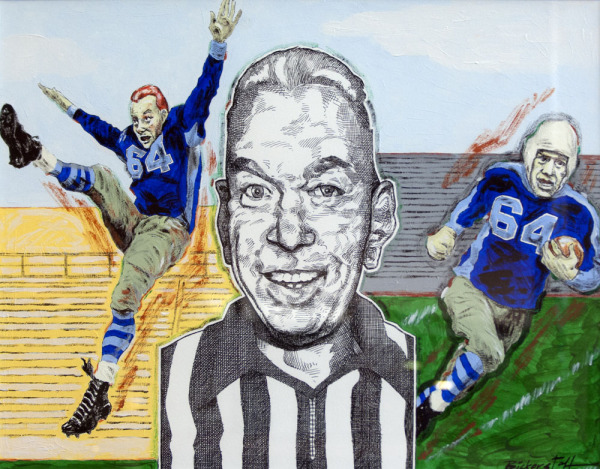 “Red” Storey’s place in Canadian sports legend was cemented on a gray December afternoon in 1938 at Varsity Stadium in Toronto. The event was the Grey Cup game, and Storey was a halfback with the Big Four champion Toronto Argonauts. Red Storey had spent three quarters of the game on the bench, which was where he had spent much of his young, often inconsistent football career.

With the Argonauts trailing the Winnipeg Blue Bombers 7-6, Lew Hayman summoned Storey from the bench and put him in the game. “Buster”, as he was known in his hometown, responded with an astounding performance. Hayman hoped the Bombers would believe Storey was a decoy, and would continue to concentrate on the Argo’s fine back, Art West. The element of surprise, coupled with Storey’s tremendous speed, and his ability to “hit like a freight train”, caught Winnipeg completely off balance. Storey thundered for three touchdowns, and ran 110 yards to set up a fourth, as the Argonauts came back to thrash the Blue Bombers 30-7.

Born in Barrie March 5, 1918, Roy Storey grew up in Allandale, attended public school there, and later attended Barrie Collegiate Institute. Roy first achieved acclaim as an athlete while In high school, excelling in several sports. A fine basketball player, Storey played on the B.C.I. team that won the District Senior title, and eventually lost in the Central Ontario finals to Niagara Falls. Red played football at B.C.I., and was a key performer on championship rugby teams. He was also reasonably accomplished on the track, at one time holding school records In the high jump and 220 yard dash, and helping B.C.I. to team titles in competition from the M.B. Tudhope Trophy.

A terrific lacrosse player, he played senior for the Orillia Terriers, Hamilton Tigers, Lachine and the Montreal Canadians. He once scored twelve goals in a single game.
As a hockey player, he starred locally for the Barrie Colts and R.C.A.F. Camp Borden Flyers, played in the Eastern League for Atlantic City, in the Michigan League with Sault Ste. Marie and with the Montreal Royals in the Quebec Senior League.

It is as a football player, however, for which Red Storey the athlete is most remembered. Argonaut star Teddy Morris saw Storey playing Lacrosse, and was told that the big, rawboned Barrie youngster was a fine football player. He brought Storey to Argonaut coach Lew Hayman for a workout, Where Storey impressed Lew enough to be offered a contract. Buster Storey left school and his hometown at the age of seventeen.

Storey was a swift, punishing halfback, but he was too inexperienced, and his performances were too inconsistent, for him to earn a regular spot. He spent most of his first season as a substitute, but played in Toronto’s 1937 4-3 Grey Cup victory over the Winnipeg Blue Bombers. Then came the 1938 Grey Cup game in which Storey became part of Canadian football lore. The following season Toronto lost in the Big Four final to Ottawa, but Storey averaged two touchdowns per game over the season. A severe leg injury began to hamper Storey’s ability, and curtail his playing time, but he remained with the Argonauts for six seasons until 1940, spurning offers along the way from the National Football League Chicago Bears among others and turning down a scholarship offer from Queen’s University.

Red Storey is equally remembered as an official. He refereed ten years in the Quebec Senior Lacrosse League. He officiated fourteen years in the Quebec Football League, twelve years in intercollegiate football, and twelve years In the Canadian Football League. In hockey, Red refereed over 2,000 games on various circuits. He put in seven years in the Quebec junior, provincial and senior leagues, nine years in the American Hockey League, and joined the N.H.L. staff for the 1950-51 season. Storey was the league’s most colourful, and among its most capable officials for nine seasons. He resigned April 11, 1959, after a game on April 4. in Chicago when drunken Chicago fans had come onto the ice and attacked him. It was not the fans conduct which bothered Storey, but rather N.H.L. President Clarence Campbell’s unwarranted criticism. Storey felt that such criticism undermined his authority, and so he left the game.

In later years Storey was more active than ever. He did promotional work for Seagram’s Distilleries, spoke at up to 80 banquets a year, refereed up to 80 celebrity and charity hockey games each year, and still found time for radio, television and commercial work.