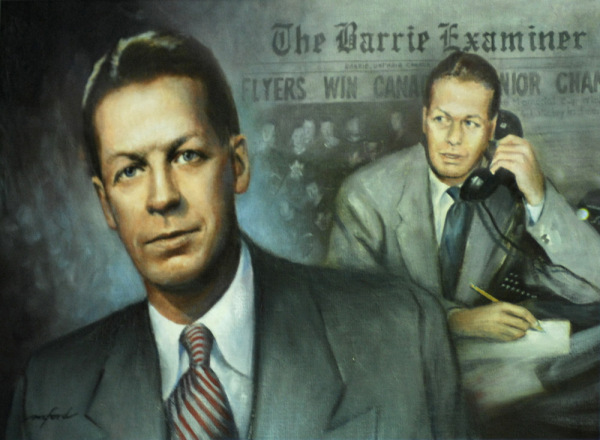 For nearly 70 years, Ken Walls’ tireless enthusiasm and selfless contributions made Barrie a better town in which to live. Many of his greatest efforts were expended on behalf of the sports he loved so well.

He was born in Elmvale on April 21, 1907. He moved to Barrie in 1909 at the age of three. His father, William C. Walls became co-owner of the Barrie Examiner in 1915, and Ken’s association with the paper began almost immediately. He maintained a paper route in Barrie’s west end while attending Central Public School and Barrie Collegi¬ate Institute, and worked as a helper in the printing plant.

After graduating from Barrie Business College, Ken attended the University of Toronto’s Victoria College. He returned to the Examiner in 1931 with degrees in business and arts, and was appointed the paper’s advertising manager, a post he held until 1939.

Walls also fought to establish the “sports desk” in an era when sports competed with other minor news for filler space in most newspapers. He served as sports editor from 1931-1948, and in this capacity did some of his most valuable work promoting sports in Barrie. The Examiner sports section became one of the finest in Canadian weeklies; the depth of coverage and photography were truly ahead of their time.

When his father died in 1939, Walls inherited an interest in the paper and became its business manager. When the Examiner became a limited company in 1940, he also assumed the posts of associate editor and vice-president. When his partner retired in 1949, Walls bought the remaining interest in the paper, becoming sole owner, publisher and general manager.

Ken Walls commanded great respect in the newspaper community. He served as president of the Central Ontario Weekly Press Association, director of Class ‘A’ Weeklies of Canada (and of its Ontario/Quebec division), and was both president and executive director of the Canadian Weekly Newspapers Association.

In 1957 Walls sold the Examiner to the Thomson chain, but stayed on as publisher and general manager, over¬seeing the paper’s conversion to a daily in 1958. The Barrie Examiner won six Mason Awards as Canada’s outstanding weekly newspaper during his tenure as writer/reporter, editor, manager, publisher and owner. In 1970 he was named Editor Emeritus of the Examiner, and in 1984 was awarded the pres¬tigious Lifetime Membership in the Canadian Community News¬papers Association.

Ken Walls’ contributions to his community are legion. He was commissioned in the 2nd Battalion, Grey & Simcoe Foresters during WWII, and served as publicity chairman for Simcoe County Unit through six Victory Loan campaigns. He was director of the Barrie Chamber of Commerce, secretary of the Barrie-Camp Borden Good Neighbour Committee, director and chairman of the Barrie Public Library Board, chairman of the local United Way campaign, president of the Barrie Kiwanis Club, and Kiwanis division lieutenant governor.

Walls’ passion for sports began early in his life. He was a talented, versatile athlete who participated in many different sports. Baseball was his first love. He won Sunday School League titles with St. Andrews juniors, Town League crowns with Collier Street United Baracas, and he starred with the Barrie Intermediates between 1925 and 1936. That team won many league and group titles, and advanced to the provincial finals in 1935. Ken hit .429 with the 1932 North Simcoe championship team.

He played Church and Town League hockey, skated for the 1926-27 Barrie Colts, was a member of the Victoria College team, and toiled for the Barrie Intermediates for a season. He played intermediate lacrosse 1931-1933, was an accomplished golfer, and won, with Fred Anderton, the 1939 Men’s Doubles Championship of the Georgian Bay District Badminton Association.

More important, however, were the offices he filled and the often thankless but always necessary duties he took upon himself. From 1930-1936 he acted as team representative in the North Simcoe Baseball League, and in 1947 was elected publicity chairman of the new Grey-Simcoe Baseball League. He served on the Finance Committee of the Barrie Intermediate Hockey Club, and was vice-president and publicity manager of the Barrie Town Hockey League. Walls was elected presi¬dent of the Barrie Garrison Badminton Club in 1947; he was also president of the Georgian Bay District Badminton Associ-ation, and several times club captain of the Barrie Country Club. He refereed Church League hockey and umpired Church League baseball. He also served on the arena commission that installed the artificial ice plant in the Barrie Arena.

Ken Walls was still an active columnist with a keen interest in sports and Barrie athletes until he died November 4, 1984. He left behind the legacy of a flourishing sports community for which all of Barrie owes him a debt of gratitude.