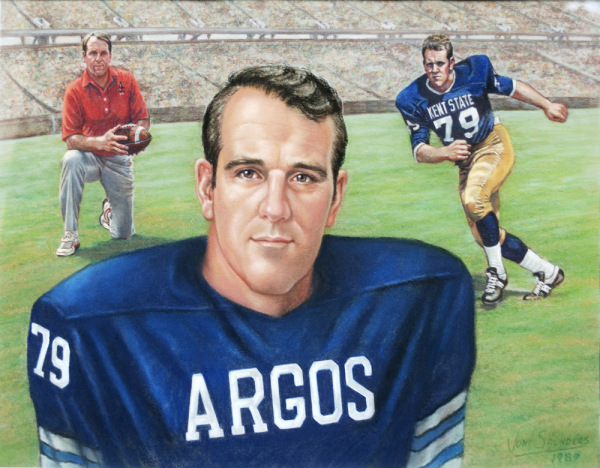 He was a fine young hockey player, but it soon became apparent that his athletic niche was on the football field. Corrigall was an awesome defensive lineman, with size and strength that belied his years. In his final season with the North Collegiate Vikings (1965), he virtually terrorized opposition linemen, as North rolled to the league title.

So great was his ability and potential, that Corrigall attracted the attention of college scouts south of the border. He was offered and accepted a scholarship with Kent State University in Ohio, and toiled with the junior varsity in 1966 (freshmen were not yet eligible for varsity play in U.S. colleges).

Jim Corrigall closed out his college career in 1969 with a storybook season. He was selected All-Mid America Conference for the third consecutive year, was voted Kent State’s Most Efficient Lineman for the second time, served as a senior co-captain, and was named an Associated Press Honourable Mention All-America. In addition, he became the first Canadian ever selected to the National Education Association’s Academic All-America Team. He was also selected to play in the 1969 East-West Shrine Game, an all-star contest for seniors. His jersey number 79 was retired by Kent State when he graduated.

Corrigall was the second round pick of the St. Louis Cardinals in the 1970 National Football League entry draft. There seems little doubt that he could have excelled in the NFL, but Jim chose to return home and play for the Toronto Argonauts, who had made him their first selection in the CFL draft. He made a big splash in his first season, winning the 1970 Gruen Trophy as the Eastern Conference Rookie-of-the-Year. That was the harbinger of a truly great CFL career. He was selected to the CFL All-Star Team five times. In 1975 he won the Shopsy Award as the Toronto Argonauts’ Most Valuable Player, and he was honoured with the Schenley Award as the league’s Outstanding Defensive Lineman.

Corrigall played twelve CFL seasons (1970-1981), and spent the last two as a player-coach. When he retired after the 1981 season, he was hired as a full-time defensive line coach by the Argos, in which capacity he served in 1982. Since that time he coached in the U.S. college ranks at Miami of Ohio, North Carolina State, and The University of Akron. In 1994 Corrigall returned to his Alma Mater Kent State University as head football coach for three years. Jim Corrigall is still in the area of Akron, Ohio. Jim Corrigall is a member of the Kent State University Hall of Fame. He was honoured as an “All-Time Argo” in 1997 and was inducted into the Canadian Football Hall of Fame in 1990.