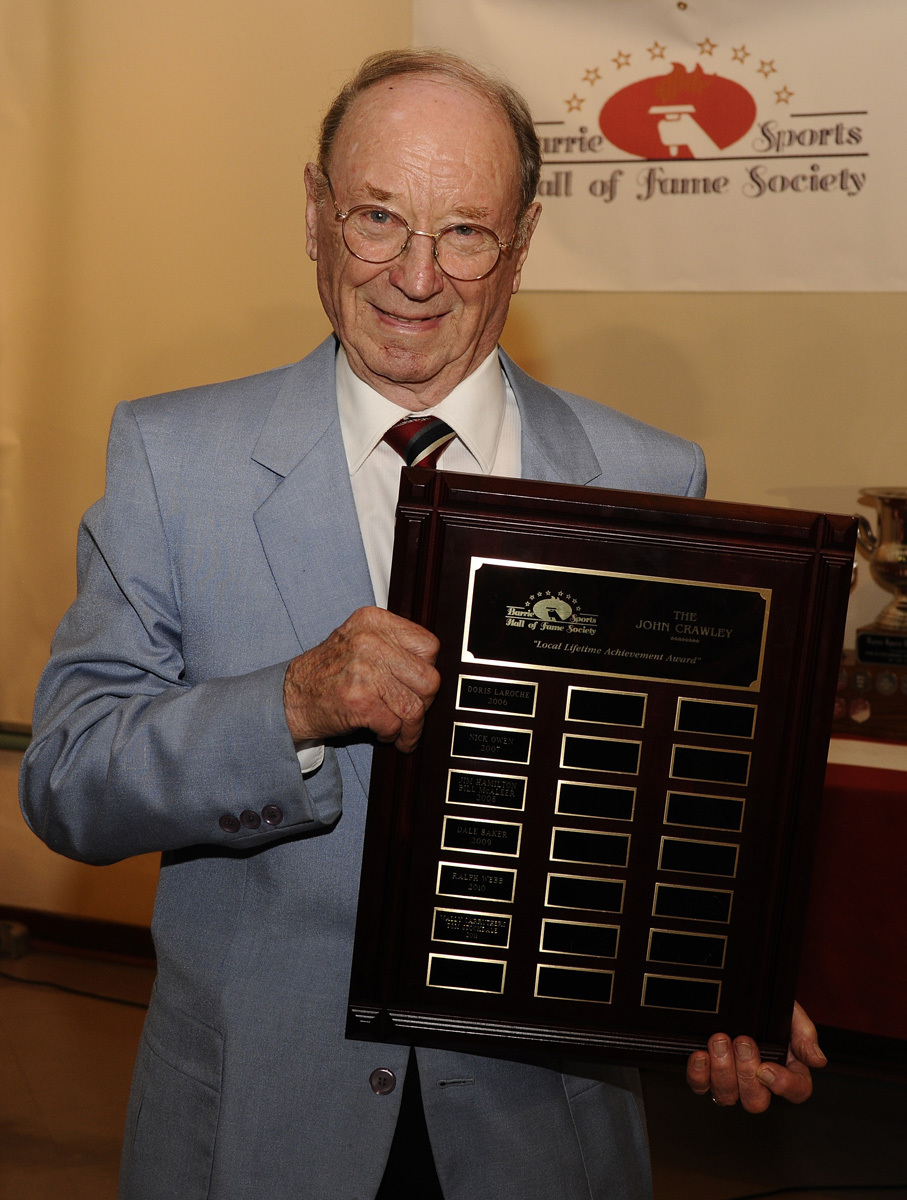 Born in Barrie, Wally Carruthers has been involved in its sporting scene in different capacities for many decades. He was a founding member of the Barrie and District Church Softball League. He was involved with the league for several years including a term as President. Carruthers was also President of the Barrie and District Industrial Hockey League. In 1954-1955, he was Secretary of the OMHA Juvenile B championship team. He coached Midget and Juvenile Hockey teams for the Air Force Association for several years. One of his star players, Dan Maloney, later had a long career in the NHL and was inducted into the BSHOF. Carruthers’ love of sports and community spirit saw him arrange excursions to Chicago Stadium as well as Maple leaf Gardens with the Barrie Boy Scouts. He was a board member of the 1973-1974 Barrie Flyers Allan Cup Championship team. Carruthers spent a number of years as Director of Barrie Parks and Recreation, including two years as Vice-Chairman. He has also been a member of numerous community events. During Barrie’s 150th anniversary, Carruthers was recruited to organize a reunion of the two former Memorial Cup Barrie Flyer teams. Former team members from all over Canada returned for the celebration. In the Ontario Winter Senior games, he was Chairman of hockey events and the musical entertainment for the Closing Ceremonies. In the early 1970’s he chaired the Barrie Winter Carnival, World Broomball tournaments. Residing close to Codrington Elementary School, Carruthers arranged with the City and Rotarians to place a rink on the school grounds. The rink was subsequently renamed by Rotarians as “Wally Carruthers Rink”. Carruthers was a charter member of the Barrie Sports Hall of Fame Society, and has been an active member on the BSHOFS Executive for many years. He was responsible for initiating a joint venture between the BSHOF and the Barrie Colts to recognize the Canadian troops. Carruthers has been a member of the Rotary Club of Barrie for fifty years.