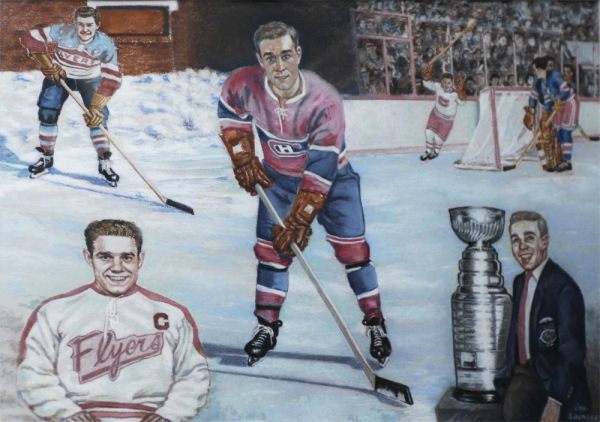 Paul Meger was born in Watrous, Saskatchewan, and played his minor hockey in Selkirk, Manitoba. “Hap” Emms recruited him to play Junior “A” hockey in Barrie, and he skated with the Flyers for three seasons beginning in 1946-47.

In 1947-48 Meger was voted the Flyers’ Most Popular Player, and was selected to the O.H.A. First All-Star Team, as the Flyers advanced to the Memorial Cup finals. He repeated his All-Star selection with the 1948-49 O.H.A. finalists while leading the Flyers in scoring.

Meger turned pro for the 1949-50 season with the Buffalo Bisons of the American hockey League, where he was named the A.H.L. Rookie of the year, and named to the second all star team. He was selected to the First All-Star team for 1950-51, and in February of 1951 was dealt to the Montreal Canadiens for $15,000 and two players.
Meger wasted no time in becoming one of the NHL’s brightest young stars. In his rookie season of 1951-52, playing on a line with Billy Reay and “Boom Boom” Geoffrion, Meger scored 24 goals. This was an era when 20-goal scorers were considered offensive stars. The highlight of Meger’s N.H.L. career was the Canadiens’ 1952-53 Stanley Cup Championship. He played one more full season with Montreal before his career was tragically cut short. On November 11, 1954, with Montreal playing Boston, Meger was struck in the head by a skate blade, suffering a serious injury which ended his career.

Happily, Paul Meger’s association with the game of hockey did not end there, as he went on to become a successful coach. In 1956-57 he coached Alliston to the OHA Junior “D” finals. Then, in 1958-59, he guided the Camp Borden Air Force team to the Canadian Armed Forces Championship. In 1962-63, he was behind the bench for the Barrie 7-Ups Intermediate “A” squad, and in 1963-64 led the Orillia Bantams to the Little N.H.L. Consolation Championship.

Paul Meger was a founding member of, and coached eight years in, the Barrie Minor Hockey Association, He won three Little N.H.L. Champion¬ships in four finals appearances, as well as winning an O.M.H.A. title and the Silver Stick Championship.

Also an accomplished ball player, Meger was, during his junior days, a softball catcher for Bryson’s Grill. He was also a baseball catcher, helping the Barrie Flyers to a pair of South Simcoe League crowns.

In 1983 he received the Ontario Medal for Citizenship, in recognition of his efforts on behalf of minor hockey, with the Multiple Sclerosis Society, with St. Andrew’s Church. and with the Cubs.

Paul Meger still resides in his adopted home of Barrie.