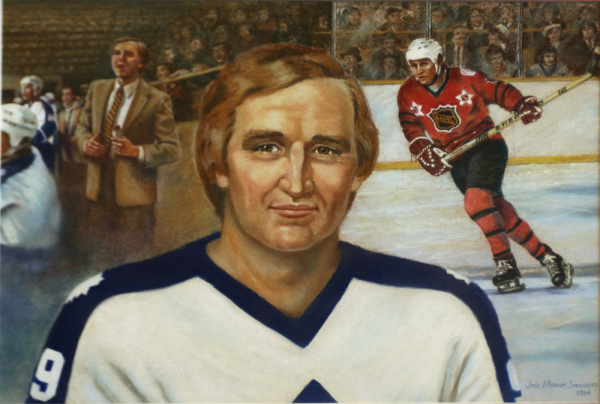 Barrie native Dan Maloney created for himself a successful professional hockey career the old fashioned way. He earned it. Although an outstanding athlete, Maloney’s success was less a product of his skills than of his character. From his youth Dan Maloney has been the type of player that every coach wants playing for him. It is no surprise then, that he became the type of coach that every player wants to play for.

A product of the Barrie Minor Hockey Association, Maloney finished his minor hockey as a member of the Co-op Midget team in 1966-67. A brief stint with the Toronto Marlboros Junior “B” club started his junior career, before he was selected by London of the O.H.A. Major Junior “A” league. He scored 40 points with London in 1968-69, then followed that up with a 66 point campaign in 1969-70. His ability to combine a tough, physical style of play with scoring skills convinced the Chicago Black Hawks to make Maloney their first round draft choice in the 1970 N.H.L. entry draft. During his rookie season of 1970-71 he scored 26 points in 74 games. The Black Hawks sent him to Dallas of the Central Hockey League for seasoning in 1971-72, but he was back in the N.H.L. for good in 1972-73.

The Hawks dealt Maloney midway through that season to the Los Angeles Kings. He was traded to the Detroit Red Wings prior to the 1975-76 campaign, and after 2½ seasons there, the Wings traded Maloney to the Toronto Maple Leafs for high-scoring Errol Thompson and a pair of draft choices.

Tired of being pushed around, the Leafs paid a high price for Maloney, who had become a respected leader, a rugged corner man. and a feared enforcer. He completed the 1977-78 season in Toronto, then played four more years through 1981-82 before retiring. Maloney’s 11-year playing career in the N.H.L. included 737 games, 192 goals and 259 assists for 451 points.

Following retirement, Maloney spent two years as an assistant coach with the Leafs under Mike Nykoluk. Upon Nykoluk’s dismissal, Maloney became Head Coach (1984-85). He resigned following the 1985-86 season when he failed to come to contract terms with Harold Ballard, but resurfaced as Head Coach of the Winnipeg Jets for the 1986-87 season. Maloney engineered a remarkable turnaround, as the Jets posted a 31-point improvement over the previous season. He remained the Jets’ Head Coach until midway through the 1988-89 season, when he was relieved of his duties by General Manager John Ferguson. Dan Maloney served on the coaching staff of Team Canada at the 1989 World Ice Hockey Championships.